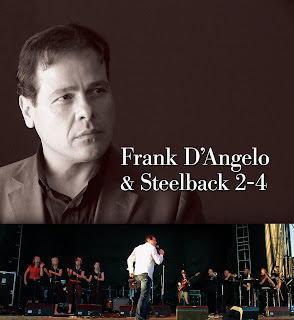 This is a tough one. I was just sent an article chronicling a day in the life of perhaps the most egotistical, self-aggrandizing, exploitative, clueless, classless individual this country has ever produced. I am talking about none other than the star of 'Being Frank' , and the man responsible for bringing us Steelback Beer (I have still, to this day, only met one individual who has ever purchased Frankie D's special brew - and that individual is the same person who sent me the aforementioned article), Frank D'Angelo.

So here's what I want you, my loyal readers (I think there are about six of you) to do. Read this article:

And then watch this clip:

And then I want you to tell me who you think comes off looking worse.

I've honestly been pondering this all day, and I can't figure it out. On the one hand, you have Frank D'Angelo being Frank D'Angelo. And I have to tell you, this was one of the saddest things I've ever read. Where I used to think of him as being infinitely arrogant and sickeningly full of himself, I actually feel sorry for the guy. He pays for his friends (the fact that he put up his house against a $100 million dollar loan to do so speaks volumes about how deeply troubled the guy is), he pays to sing in his band (more or less), and he doesn't seem to have any idea that most of these people find him repulsive.

When all of that money runs out and when Barry Sherman comes to his senses and pulls the plug on his funding, our man Frankie D will be out of business, out of his house, and utterly alone. And in reading this article, you can tell that he will be completely blindsided by the whole thing when it happens. And at this point, it's not a question of if; it truly is about when.

As much as I hate to say it, if you read on the ticker that the Apotex dude has ceased relations with the wannabe beer mogul, pick up Frankie in the D-level celebrity suicide pool, because that one is pretty well etched in stone. After writing this, I will probably find myself rooting for the man to succeed (an impossibility) just so this seemingly inevitable chain of events doesn't come to pass. But really. When a man actively chooses to put his beer in plastic bottles, knowing full well that the plastic bottles cost more and they can only be used once, there is a serious, serious chemical imbalance going on.

As for Corey Feldman. How could one of my childhood heroes have fallen to this level. I understand that this little E.C. cameo took place in 1993, but he was once Teddy F'ing Duchamp. Of Train Dodging and telling Milo the junkyard man that he'd-rip-off-his-head-and-shit-down-his-throat fame. This was, at one time, one of the five or six coolest kids on the planet. I mean, did you see 'License to Drive'? And now he's doing a half-taking-off-the-jacket shimmy shake like a schizophrenic Antoine Walker wearing white socks with black loafers, and I just plain don't know what to think.

I promise I'll write something a little more relevant next time. Maybe about how I (along with the rest of my late-20's hockey team) finally realized that I am not nearly as young as I used to be, and should probably stop deceiving myself into believing that I'm still 19... But most likely there will be an entry recounting a story involving 25 bottles of illegally smuggled booze, Elliotte Friedman in a Karaoke bar, and Technotronic blaring with disco ball and strobe light in Nashville's only Disco Party Taxi at four in the morning while waiting in the Krystal Burger drive-thru - all of which pretty well goes against everything the previous sentance just set out to prove.

I only read one page of the Frank D story (too lazy to read the other 6),but how pathetic does a guy have to be pay for friends who shit on him behind his back. Plus, his beer DOES taste like piss.
As for Corey, was this not his Micheal Jackson stage? At what point do you roll back the tapes and have a look at yourself and say, "What the hell am I doing?"