Bruce Springsteen and The E Street Band in The Hammer 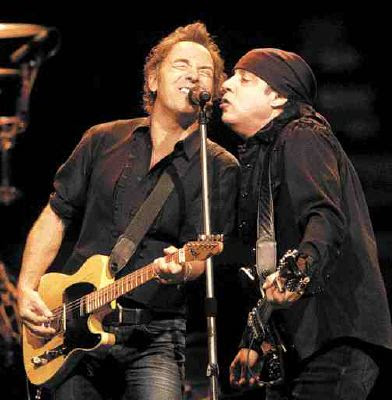 I have seen the sunset over Darwin Bay in the Galapagos Islands. I have drank cool, frothy beer from Lord Stanley's Mug. I have seen the Cubbies clinch the Pennant from the bleachers at Wrigley. I have vomitted violently all over the ancient ruins at Machu Picchu. I have seen Eva Longoria's husband hoist the Larry O'Brien trophy...

And I have seen the E Street Band perform Kitty's Back on a rainy night in Hamilton, ON.


In all honesty, I didn't think I'd ever live to see "the heart stopping, pants dropping, earth shattering, hard rocking, hips shaking, earth quaking, nerve breaking, Viagra taking, history making, legendary E-Street Band" take it to those heretofore unfrequented heights of funkification, and certainly not with Phantam Dan at home recovering from treatments for melanoma. I'm telling you, the mighty Max looked like the reincarnation of Vinnie Lopez with 30 years of practice, and you would have sworn that the boys from E Street were back at the Hammersmith Odeon, or at least at Conan's place... It was the unequivocal highlight of the show for me, and one of the all-time Springsteen highlights in my life. Had there been more room in my 8th row seat, I would have surely done the "Shake a Tail" like it was Saturday night at Clinton's.

Well you better learn to move fast when you're young or you're not long around
Cat somehow lost his Kitty down in the city pound
So get right, get tight, get down...

Let me tell you, there was a whole hell of a lot of getting down in my section...

It's hard to say that a single groove is worth the price of admission alone, but I'll go ahead and say it right here: I would have gladly forked over $120, taken my seat, witnessed the band laying down that one, near-perfect track, and gone home a happy man. It really was that good.


As for the rest of the show, there was obviously some carry-over from the Toronto show back in October (to read a rollicking revue of that tour-de-force performance, click HERE), but the songs he switched up made it all worth while.

In attendance for this show were my parents (who dutifully made the trek last minute without tickets, only to score a pair of great seats for $100 each), and my buddy Dunner, along with his sister and their old man. Truly a family function worth attending.

I was kind of hoping Bruce would pay tribute to Jeff Healey (Toronto guitar legend who passed away Sunday) the way he did for Warren Zevon at the Toronto show back in September of 2003 (when he opened beneath a shimmering full moon with a beautiful, acoustic rendition of My Ride's Here... chilling), but instead the band opened with a rocking version of No Surrender, one of my favourite tracks (especially the eye-sweat inducing acoustic version); it would have been great to hear Bruce do "Angel Eyes" for Jeff, but this was a pretty decent consolation. There are few lines in music more true to life than: "We learned more from a three-minute record than we ever learned in school".

Because The Night is another great song that they inserted into the set this time around, but it seemed to me that, on this night, the band was taking a little while to warm up. Having grown up on those bootlegs from the '70's, I couldn't help but notice that most of these uptempo songs are done a little slower than they were 30 years ago; as if the band is running through them in three-quarters time. The songs just don't seem to sizzle and scream the way they did back in the day. Maybe it was because they were missing Danny (home sick) and Patti (home taking care of the kids, or as Bruce put it: "We have three teenagers; someone has to make sure they don't burn the place down..."). Maybe it's because the band is getting older, or because they've done those songs so many times in the past that the energy just isn't there any more... or maybe it's because the fans are all 30 years older and just can't keep up. Whatever the reason, the songs; and particularly Because The Night; just don't come off the way they did on the Darkness tour (think: September 10, 1978, Cincinnatti - if you don't have a bootleg from one of those legendary shows on the Darkness tour, do yourself a favour and grab a couple... they are nothing short of awe inspiring). My dad says that the Rolling Stones started slowing their songs down in their old age... Needless to say, we are not fans of the "Stones-ifying" of uptempo Springsteen tracks.

Darkness on the Edge of Town was a great, classic rendition. The only problem with this tune was that my entire section sat down. Maybe it was because it was a Monday night and it was impossible to get a beer (four beer stands for 19,000 people just doesn't cut it), but I thought the crowd was lacking a little energy. I have read revues which state otherwise, but when an entire section (with the exception of myself and another dude in a Stone Pony T) sits down for one of the ten best songs the man has ever written, I call that a lame crowd. Case closed.

They followed Darkness with a note-perfect version of The River. For me, this was one of the supreme highlights of the show; just a stellar version.

Of course, any conversation about The River would be incomplete without mentioning the story he tells before the song on the '75-85 Live album. For me, it's the kind of thing that brings a song to a level that it could never otherwise reach. To me, there's nothing more powerful than context. As in: a song might be pretty good, but when you know the story behind it; what the author was thinking and feeling when he wrote it, what the song it really about; it makes that song that much more powerful. And I understand why Springsteen doesn't talk on stage about his older songs - we've seen all of the shows, we have all of the bootlegs, and we already know what those songs are all about - but I really wish he would give a little more context to his newer material. Maybe that's why his stuff off of the Magic album seems to be lacking a little, and why it doesn't move me as much as the older stuff: because I don't really know what those songs are about.. at least not in the way you're supposed to feel Springsteen's music.

I'm not looking for an entire story like he used to give in the middle of Growing Up; just a little old fashioned context. Like this. See? Not too much to ask.

The boys played Thunder Road in the encore, and no matter how many times you hear that song, you really can't beat belting out at the top of your lungs:

So you're scared and you're thinking
That maybe we ain't that young anymore
Show a little faith, there's magic in the night
You ain't a beauty, but hey you're alright
Oh and that's alright with me


Some other highlights from the show included some big lug getting up on stage and trying to do the funky chicken during Girls in Their Summer Clothes (I could have sworn it was my cousin, Little Buddy), and Silvio Dante chiming in with some vocals towards the end of Long Walk Home... Honestly, Miami Steve has one of the greatest rock and roll voices I've ever heard, and the guy just exudes cool. And I have to say that Nils Lofgren and the Mighty Max are quietly stealing the show with their ridiculously excellent playing. Those two have simply never been better.

And then the band played the greatest song ever written about street-savvy felines, and another thing on my "to-do before I die" list was quickly crossed off.


Next up on said list: "Steve Earle at Massey Hall"... show starts in about three hours.

Bonus Coverage: If you ever needed a little something extra to get yourself jacked for a Springsteen show, check out Buccigross and Everett dropping dimes before the Hartford show: