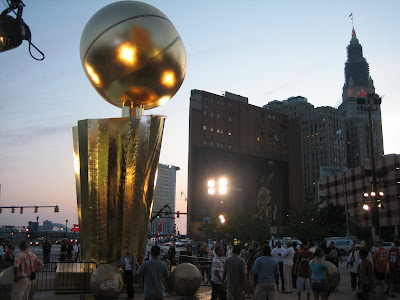 When the Larry O'Brien trophy is all shined up and in the house, and you just happen to be within the arena's city limits, you make a point of being there. End of story. Even if you know well in advance what the outcome will be, and that the game will invariably be unwatchable.
After having my request for press credentials unceremoniously denied by the good people at NOW Magazine (their exact words were: "we rarely...well, actually never write about sports"), I found myself seeking entry into the big dance the old fashioned way: by attempting to procure tickets via the quasi-legal free-market system of supply and demand which is at the very heart of the American Dream. Scalping, to the lay person.

I showed up in Downtown Cleveland about 20 minutes before the game with $140 USD, thinking that I had a slim chance of scoring a single nosebleed. When I asked the parking lot attendant what my chances were, he said: "None to none". Didn't look good. Worst case scenario, I thought, would be that I end up walking around the arena for awhile, and then heading into the Thirsty Parrot for a few frosty beverages while watching the game on the big screen. I guy could do worse. I ended up walking around the arena once, taking a few snaps of the gigantic blow-up Larry O'Brien trophy out front, and noticed that I didn't see a single person selling a ticket. I had resigned myself to watching from a barstool, and when I heard Taylor Hicks belting out the American Anthem, I figured that it was just as well. But when I eventually turned the corner on my way to the bar, I happened upon a sidewalk full of people hawking the desired contraband, meaning that I was in luck. The first guy I asked wanted $350 for lower bowl, and when I told him I just wanted in the door, he offered me bleeders for $150. So I kept walking. Next dude could do it for $120. You know the story. I walked up and down the block and then found someone with 4 singles. We both knew there was no way in hell he was getting rid of all four, so I offered him $80 as the ball was tipped, and he begrudgingly went along for the ride. The next thing I knew, I was sitting in Section 217, Row 14, sipping on a Zydrunas Ilgauskas (Cleveland's version of a Delgado) between two other dudes who had very obviously scalped singles. Life was grand. 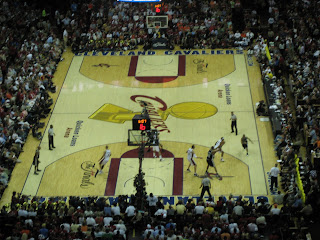 ion. Guys were missing wide open jumpers all night, Lebron was giving the rock away like a venereal disease, the refs were like ninth graders with self-esteem issues (blowing everything), and the Big Fundamental appeared entirely secondary (the opposite of "fundamental", for those of you without access to your thesaurus). I mean, it took until there were 32 seconds left in the third quarter for the Cavs to break the half-century mark. And then the Spurs did their best to give the game away in the fourth, going 6 1/2 minutes without scoring... It was just hideous.

Making matters worse was the fact that this was just about the lamest crowd I'd ever had the misfortune of sitting in. It felt more like a Monday nighter in May between the Jays and D-Rays than it did an elimination game in the NBA finals. Maybe it was because everybody in the building knew that the Lebrons didn't have a hope in hell of winning this game, let alone the series (believe me, the Cavs were never in this game. Even when they were tied with 4:40 to go, they weren't in the game. This was a no doubter from the time Mr. Longoria slashed through the entire D for a ridiculous layup with 2:30 to go in the half, and you could feel it in the crowd from that moment on. Everybody knew there was no stopping these guys). Some drunk guys were walking around at recess, trying to get a "Go Cavs Go!" chant going, and when nobody joined them (in an ELIMINATION GAME!!! How are you not making noise in an ELIMINATION GAME???), they started chanting "This Crowd SUCKS!" I couldn't help but laugh.
The problem with the Q, as it is lovingly referred to, is that the people sitting there are waaaaaaaay too dependent on the jumbotron for direction. By no means is the Air Canada Centre an Indiana Assembly Hall equivalent, but at least there's a semblance of atmosphere in the building. The playoff games this year were pretty damn wild, and you can bet that if the Dinos ever made the finals, the place would be an absolute madhouse. But the Q? Not exactly Baron's House.

It is a major pet peeve of mine when the loudest a crowd gets all night is when the jumbotron tells them to. And it's even worse when it's for one of those races where the loudest section gets the free pizza or whatever the hell it is they're giving away as a promotion. If the game itself doesn't get you excited enough to make noise, then you shouldn't be there. Seriously. Give your ticket to someone who cares. The irony of it all is that the jumbotron kept showing these montages of the players saying that Cleveland had the best fans in the world and that they owed so much of their success to those same fans. Word to the wise: if you're constantly being reminded of how you're the best fans in the world, chances are, you're not. In fact, you might even be the opposite. It's like when a somebody is constantly telling you how nice a guy they are. In all likelihood, the guy's an asshole.

Nothing highlights the crowd's dependence on the jumbotron quite like the freethrow sequence that took place Aat some point in the second half when Tim Duncan stepped up to the line. There was almost no noise in the place as he took his first shot, and it wasn't until they put up a Pittsburgh Steelers logo (and then in the second half, a Buckeyes logo) on the big screen that people began booing with any kind of emotion. To me, that tells you everything you need to know about what kind of a crowd it was. Translation: not a basketball one. There was some serious irony later on when the jumbotron announced: "IT'S TOO QUIET IN HERE", completely oblivious to the fact that it was entirely responsible for the unwanted serenity. It was like something out of L.A. Story.

In any event, I was in the strange position of half-rooting for both teams. I was cheering for Cleveland because I wanted to see them win a game and because I wanted the city of Cleveland to have at least one good thing happen to it in its bleak and dejected sports history. But at the same time, and for reasons entirely self-centered, I wanted to see San Antonio pull off the sweep, simply because I wanted to be there to see them hoist the Larry. So I was going crazy when Lebron threw it down, but I was secretly relishing every run the Spurs went on as they slowly pulled away. I'm sure I'll be karmicly punished for this sports infidelity at some point in the future.

In the end, to no one's surprise, Eva Longoria's fiance and the pride of Bahia Blanca, Argentina, were too much for Boobie and the guy with Rasheed Wallace's patch of hair on the back of his neck. Because really, that's what this series came down to: when Tim Duncan struggled, his teammates were there to pick him up; but when Lebron struggled... we 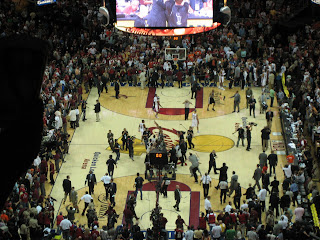 ll, I'm not even sure that Lebron has any teammates. They are absolutely brutal, and Lebron is making things worse by getting them to the finals and allowing his GM to think: a) that he has anything more than a WNBA supporting cast, and b) that Mike Brown is capable of coaching even a highschool team. Honestly, When he didn't go 2-for-1 in the last 35 seconds of the first half, I wanted to scream (something that absolutely no one picked up on was the fact that, when he failed to do so, the official scorer actucally stopped the clock to allow the Cavs to get last shot. It's true. Look at this clip. Go to the 1:18 mark and see for yourself. The clock is stopped at 26.7 seconds for the entire sequence. This is what happened on the game clock in the arena, and as soon as Lebron put it home, they started it back up again. Everyone is trying to make Mike Brown look good, and it will do nothing but cripple this team in the future). The only way this team ever wins anything is if Lebron can average 48-12-0 a game, and that ain't ever happenin' against a team like San Antonio. They're too damn good, and they're too damn well coached. Mike Brown is not beating Pop in a four game series. Ever.

Because as Rosco, the seanmccallum.com resident basketball expert has so often and eloquently pointed out, coaching in the NBA is everything. Do you know how many coaches have won an NBA title in the past 21 years?

op, and Larry Brown. That's it. Do you know how many NHL coaches have won in that same time frame? Sixteen. SIXTEEN! Sixteen different coaches, and there have only been TWELVE different teams that have won in that time frame. The coaches are practically inconsequential, with the only ones to repeat in that time frame being Glenn Sather (with the help of some guy named Wayne) and the great Scotty Bowman. Those numbers are staggering. I'm getting way off topic.
At the end of the game, the Spurs celebrated like they'd been there before (which they have) and as though they expect to be there again (which they surely will). The prese

ntation of the Larry O'Brien pales in comparison to the Stanley Cup, and it lacks the midfield pile-on of the World Series, but we did get a few candid shots of Eva wiping away some tears of joy (the only worthwhile thing shown on the jumbotron all night) as her husband-to-be was accepting his well deserved MVP award, as well as some history that I'll keep with me for the rest of my life.

All in all, seeing a dynasty team being crowned isn't a bad way to spend a night when you'd otherwise be stuck out in the 'burbs of Cleveland.
Posted by Sean McCallum at 4:38 p.m.