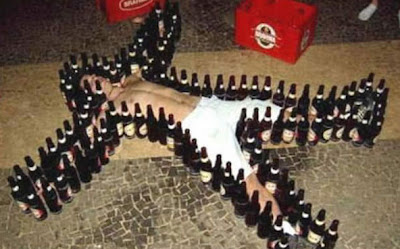 There's little doubt that everyone out there is familiar with the Booty Call. It's late at night, you've had more than a couple of drinks, you haven't managed to hook up with an eligible bachelorette in your time at the bar, it's past last call and most of your buddies are heading home, but for whatever the reason, you're just not quite ready to shut it down yourself.
The next phone call placed is usually the "booty call". In most cases, there is a loosely defined, unspoken agreement between two members of the opposite (or same) sex whereby one will drunkenly call the other at any time of the night, and provided that the party on the other end of the line isn't already engaged in any elicit sexual activities, an awkward invitation to "hang out" will be extended.
Urbandictionary.com defines the Booty Call as:
A late night summons -- often made via telephone -- to arrange clandestine sexual liaisons on an ad hoc basis.
Over the course of the past 5 weeks, for better or worse, I have become all too familiar with the close relation of the booty call: the Boozy Call.
You see, five weeks ago, I essentially became a bachelor. My girlfriend left to go to India for two months, leaving me with a heretofore unprecedented amount of freedom, and an apartment all to myself. In many ways, this freedom has been glorious. And my friends, far moreso than myself, have decided to take full advantage.
I'll allow them to explain. Here is a transcript of the phone messages I received on Saturday, October 18th (officially Sunday, October 19); approximately five hours after my girlfriend had left the country:
Message #1 (2:47 am)
Sean Mccallum, this is Nate Dogg and D-Hibb. We are calling because we heard that you are no longer with a girlfriend and might be lonely at home with a bunch of scotch and whiskey. You might ignore this message, but I'm telling you right now, we're coming to your place and knocking on your door. It's simple. You should call us back and say, "don't come to my house and knock on my door", OR, you can get some ice, get some whiskey and scotch... Get D-Hibb some beer because he doesn't like it, and we will be there shortly. I will call you back in 5 minutes... You should save this message....
(four seconds of unintelligable rustling...)
What the fuck? I almost dropped my phone...
Message #2 (2:52 am)
Sean. Natey and D-Hibb again. We're just gonna go get fuelled up. We just left the Underground Garage. We're walking up Spadina... (now singing) 'Take the bus! What bus? The Spadina BUS!!!'... And ahhh... We'll be right back at you, buddy. Honestly. I will be knocking on your door, so you should call this number back, 'cause we will be coming to your house to sample scotch and whiskey... There's people... Asian people riding bicycles past me right now... You should save this message, because it would probably be pretty funny. Anyway, call us back you fuckin (unintelligible). Stop crying in your bed because your girlfriend went to India...
Message #3 (3:11 am)
Could be your second... Might be your third message. We are coming to your house. You dropped her off at the airport, I don't know when. But we are coming in full force, the D-Hibb and the Hutch, we're showing up. The double-H. We're gonna penetrate. We're gonna take your scotch, and rob you blind. Anyway... What time is it? I don't know. You fuckin figure it out. You brought the midget, you figure it out. Call me back.
When they called again five minutes later, I finally answered the phone. Sweet Nate's response:
"Holy Fuck!! D-Hibb, we're LIVE!!!!"
Within two minutes, they were stumbling out of a cab, laughing their asses off, and waking up the unfortunate people who live downstairs from me.
I had succombed to the boozy call. We proceeded to drink at my place until well after the break of day. Like the sober participant on the receiving end of a booty call, I had a blast for those few hours they were here, and then I felt dirty and unwholesome when they left in the morning.
In any event, I naively chalked this chance encounter up to the fact that it was my first night of bachelorhood. But then last night, come about 3:15 am, my phone began ringing again. I recognized the number. I knew what they were after. But I had my pride. I had my dignity. And I was determined not to give it up so easily this time.
(Actually, it had nothing to do with dignity. What it had to do with was the 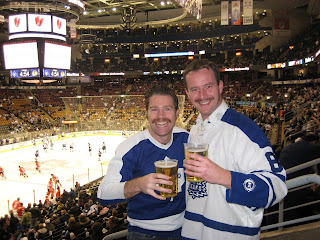 fact that I'd been drinking $55 Delgado-rounds on Wendel Clark night at the Leafs game, and then, against my better judgement, had gotten on a bus to Hamilton for a house party, finishing the night off with a last call of plum brandy shots at my buddy Sully's place in Oakville. Needless to say, the last thing I needed was scotch, whiskey, and DJ Eric Foreman.)
So I did what any self-respecting man would do if put in the same predicament: I turned my phone off, and with my buddy Dunner already passed out on the couch, I turned out the lights and went to bed.
Ten minutes later, I awoke to the incessant ringing of my doorbell (which also rings in my downstairs neighbours' place, for the record). I had no choice but to jump out of bed, disgustedly muttering "what-the-fuck"s and "you-gotta-be-fuckin-kidding-me"s as I ran down the stairs in my gitch. Sure enough, there were my two boozy calls, smiling drunkenly on the front porch.
What could I do? I opened the door, and we drank and laughed until 5:30 in the morning.
Here is the message they left for me before arriving, although I didn't actually listen to it until this morning:
Message #1 (3:15 am)
Nate: (apparently speaking to the cabbie) I know people might tell you it's your job, but it's not your job. Your job is to, once you pick us up, to drive...
Nate: (now addressing me) Sean, it's Nathan and D-Hibb. Guess what? It's that time again. We are coming full fledged. So answer your door. Take down the dirty pictures... But leave Dolly up. We're comin'. And Dunner?... Show the fuck up. Represent Barrie. Peace!
D-Hibb: (addressing Nate) You sure they left Hamilton though? For sure?
Nate: (addressing D-Hibb) Ryan dropped them off at his house...
For the record, I have no idea what kind of dirty pictures they were talking about... And the Dolly reference is a photograph of Dolly Parton that inexplicably sits on the mantle... And I can't believe my brother Ronnie would sell me out like that... And I felt like all hell today, so much so that I had to bail on the Grey Cup party I was supposed to attend.
But you know what? All things considered, I have to say that I'm a big fan of the Boozy Call. And the next time those guys are looking for some late night (drinking) action, chances are they'll dial my number again. And chances are, I'll open the door.
What can I say? I'm weak when it comes to matters of tha drink.
UPDATE:
The third installment of the Boozy Call took place this past Saturday night (Dec. 14). It involved a giant light-up Santa Claus, and more South American sugar cane moonshine (96% alcohol) than I'd like to admit. Below you'll find evidence of the wreckage.. 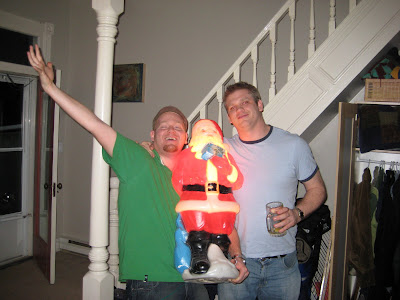 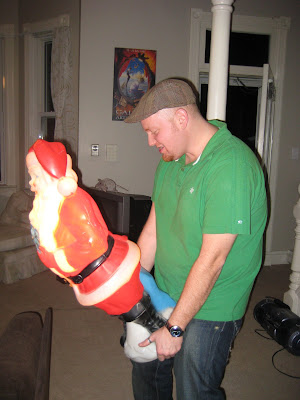 nice to know what they are actually doing until 7:00am Sunday mornings!!

V, I wish I could apologize for those two, but it is 1000% their own doing. But rest assured, they are always in good hands when at my place. I wish I could say the same for the plastic play-things...

..... I feel REALLY bad for the people that live below you.

By the way, does that mean that Marlot and Dave were part of the boozy call?????