Canada at the Olympics 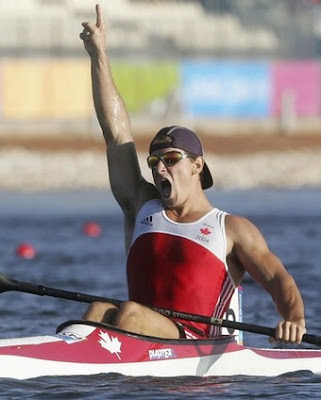 Countries with more 2008 Olympic medals than Canada to date:
- Azerbaijan
- Zimbabwe
- Algeria
- Kazakhstan
- Kyrgyzstan
- Mongolia
- Armenia
- Tajikistan
- Togo
- Uzbekistan
Now, I'm not saying that Canada is inherently better than these countries... but come on.
Canada's GDP is estimated at $1.178 Trillion (2006). Togo's GDP? A little over $9 Billion. By no means am I a mathematics major, but isn't that like 1/130th of our country's economic power? How can we not compete with these guys? Mongolia's GDP? Slightly more than $5 Billion (1/235th of ours). In fact, I would venture to guess that if you were to add up every country's GDP on that list, it wouldn't even be half of what ours is.

(Some quick calculations have shown that the combined GDPs of the above-listed 10 countries is approximately $583 Billion - just less than half of Canada's $1.178 Trillion)

And yet each and every one of those G8 powerhouses are absolutely dominating us on the podium. I have oftentimes and unabashedly proclaimed Canada to be the greatest country on earth, and by no means am I rescinding that claim. But I think it's time we get our asses in gear with regards to athletics. This has gone far beyond the point of mere embarrassment.

(By the way, I've watched a total of about 20 minutes of the Olympics thus far. There's only so much men's gymnastics you can watch while completely shitfaced at 3 o'clock in the morning.)
Posted by Sean McCallum at 8:40 p.m.

While Canada's performance is pretty sad, it's recruiting, more than training, that is causing some of those countries to be ahead of Canada in the standings.

For instance, Kristy Coventry (Zimbabwe) does her training at Auburn (home of Bo Jackson), not Zimbabwe. As far as athlete development, that medal probably belongs to the US.