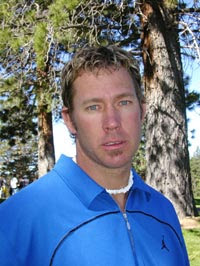 In honour of this week's "unofficial" White Oaks Secondary School 10-year reunion going on in Cuba (my buddy Phatty is getting hitched under the watchful eye of a Communist regime {can you feel the romance?}, and a dozen or so of the former high school legends will be making the trip south to sit in on the nuptials - most of us are bringing our better halves, and needless to say, with the rum going down faster than a Hastings Street hooker and the glory stories being tossed around like a pair of Freshman co-eds with self esteem issues, we're putting the over/under for guys coming home single at 2.5 - so far the smart money is moving towards the "over"), I decided to delve into my OAC yearbook to see exactly what was going down a decade ago.

(Note: still no word on whether or not WOSS's fourth most famous alumnus, the above pictured Mike Vanderjagt, will be in attendance. Vanderjagt of course fits into the list of most famous WOSS alumni behind: Ante "Tony" Josip Mandarich (taken 2nd overall in the '89 NFL Draft, one pick ahead of Barry Sanders... yeah, that Barry Sanders), Chris Hadfield (first Canadian to walk in space), Hamish Guthrie (not an actual WOSS grad), and just slightly ahead of Super Dave the Custodian (not certain whether or not he graduated at all). To call that list a murderer's row would be an understatement of the highest order.)


As for the OAC yearbook, just let me begin by saying that there is absolutely nothing more mortifying than going back and reading what you wrote in the comments section next to your graduating picture. I think Thomas Pynchon put it best when he said: "You may already know what a blow to the ego it can be to have to read over anything you wrote 20 years ago, even cancelled checks." Well, let me tell you that 10 years ain't much better.

For Exhibit A, you need look no further than what I wrote for my "Last Words". This was what I was leaving my entire high school graduating class with, presumably so they could remember me for all of eternity. And what I wrote was:

... I mean, what the fuck is that even supposed to mean, anyway? I sat here and read it thirty-six times and I still have no idea. But I guess when you think about it, you really can't imagine there ever existing a more pompous, self-important, vainglorious human being than a 19-year old on the verge of graduating high school (as if that were some sort of a staggering achievement or something). I mean, really: who the fuck did I think I was?

In any event, I was able to come across some pretty entertaining quips in this section, most of which came from the people who will be sipping Mojitos with me on the beach in less than 15 hours. So here are the awards I'm handing out from the high school yearbook quotes of White Oaks Secondary School's graduating class of 1997:

Phatty: "Darts" (the groom-to-be is currently employed as a representative for Rothmans Benson and Hedges)


Indecipherable whether they're the weakest or most profound "Last Words" (aside from mine, whose inanity have been well documented)

Skeeter: "To forget is to move on"

As I alluded to before, my graduating quotes were about as lame as they get, so I'm giving myself a mulligan. Here's what I would have written, knowing what I know now, 10 years down the road (is that a mixed up Seger/Springsteen quote, or just subliminal foreshadowing?)


Nickname: I never had one and I wish I'd never tried to give myself one in my high school yearbook. I was an idiot 10 years ago, and some might argue that I remain one to this day. Sometimes it's difficult to disagree with the majority.

Favourite Saying: "If you're gonna be a man in the nighttime, you gotta be a man in the morning" (heard that one on the radio at 6 o'clock on Saturday morning, driving to hockey. Needless to say, it resonated at the time)

Coolest Memory: The truth was, I hated high school at the time. It was pure hell, and I think it remains that way for most kids today. But if I had to put one down at the time, I would have said "Hibbard naked on the picnic table at 7pm in the pouring rain at Elora Gorge". To this day, that still seems pretty cool. Of course, today, we just refer to that entire state of mind as: "Remember that time in HIGH SCHOOL..." (one of our girlfriend's just broke up with us as I typed that)

Pet Peeve: At the time I wrote "Good people doing bad things". And as self-righteous and indulgent as it was, that's still a pet peeve of mine. I have no time for people who make excuses for their behaviour and refuse to take responsibility. Don't be such a fuck-up. So I'm sticking with that one.

Known For: 10 years ago, I wrote that I was known for "Friday nights". And at the time I was. I was the go-to guy if you wanted to know what was going down. If it was a party you were looking for, there was a party I could get you. Today? My Friday nights mostly consist of sitting in front of the computer and turning in stone-sober before midnight. Not sure I want to be known for that anymore. I guess today I'd put: "Making that old guy drink beer out of my jock at Clarkson in Club '99 back in the spring of 2002". As you can see, I've done a lot of growing in the interim years.

Philosophy: No self-respecting guy would ever have a philosophy on life, let alone write it down in their yearbook.

Probable Destination: 10 years ago, I wrote that my probable destination was: "Hungover". I still think that single word is the highlight of my creative high school career. Sheer brilliance.

Last Words: This is the toughest section. What do you want people to remember you by? I have narrowed it down to a first runner-up and the quote, if given another chance, I'd leave my fellow WOSS Wildcats to remember me by.

"My style is impetuous. My defense is impregnable, and I'm just ferocious. I want your heart. I want to eat his children. Praise be to Allah!!!"
- Mike Tyson

"Walk tall... or baby don't walk at all."
- Bruce Springsteen

The SeanMcCallum.com blog will probably be offline for the next week because I'm told that Cuba doesn't exactly have a great deal of readily available internet access, but I'll see what I can do.

In the meantime, feel free to amuse yourself with the pop-culture peddling of my good friends at www.barstoolsports.com
Posted by Sean McCallum at 6:59 p.m.