Indecent Quotes of the Week, Patty Griffin, and Higher Education 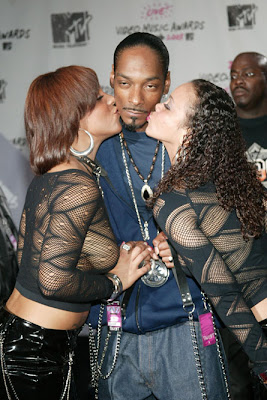 It's not often you come across three quotes of such astounding ribaldry within the span of a couple of days, but alas, here are three fantastic quips that your life will be incomplete without having digested:


"We are not talking about no collegiate basketball girls. We're talking about ho's that's in the hood that ain't doing shit, that's trying to get a nigga for his money. These are two separate things."

- The inimitable Snoop Dogg, clarifying once and for all the difference between the "ho's" he so jovially reveres in his love ballads, and the "ho's" that Don Imus so indefensibly slandered. (For the record, I love Snoop and think the world would be a better place with more of him. Did you catch this appearance with the intermission guys during the Ducks-Wild series? Ten out of ten.The only thing that could have topped it would be if he would have concluded the segment by screaming: "LONG BEACH IN THA MUTHAF*CKIN' HOUSE!!!)


"Well, son, you won't make much money, but you'll get more pussy than Frank Sinatra."

- Ronnie "The Hawk" Hawkins, as recounted by Robbie Robertson in The Last Waltz, when the Hawk was recruiting Robbie and his mates to join The Band.


"You can write it down just like that: 'David Ortiz says Manny is a crazy motherfucker'. That guy, he's in his own world, on his own planet."

- Big Papi on Manny being Manny, taken from an article that is absolutely essential reading for any poser Red Sox fans out there (of which there are far too many in Toronto - you know, the people who went out and bought overpriced 'B' hats after the Sox broke the curse and/or they had the misfortune of renting that inexcusable-bastardization-of-the-fantastic-Nick-Hornby-novel-reincarnated-as-an-abominable-chick-flick; and who claim to be Red Sox fans but would wholeheartedly cheer for the Jays in an improbable ALCS showdown; and they know it; were it to ever come to fruition), found in this week's New Yorker.

Last night, I had the pleasure of seeing Patty Griffin at Trinity St. Paul's Church in Toronto. This was a show that came highly recommended from my sister, an accomplished song writer in her own right, who guaranteed that I would love the show. And really, she wasn't far off.

The venue was pretty well perfect. We showed up just before seven, where my parents and my sister and her boyfriend, Blake, were waiting in line. It was general admission seating, and we managed to score a seat in the front row of the balcony, literally on top of the stage. Like, if I'd fallen over the railing, I would have landed on top of the piano. Sandra said that our seats reminded her of that Seinfeld episode where Jerry and Kramer go to watch the operation and Kramer ends up dropping a junior mint into the patient. I really didn't think the analogy applied until the girl playing the upright bass sat down to play the piano for a couple of songs. As my dad put it: "there was at least six inches of visible ass cleavage". It was pretty unbelievable. I had a pack of tic tacs in my pocket, and it took every ounce of my being to resist dropping one home. But I digress.

The opening act was a couple of guys who called themselves Terramoto, and despite the fact that it was just the one guy on the drums and another on the upright bass (with the occasional help of computer reproduced keyboards), they managed to fill that church with some serious latin-infused beats. Cuban and Peruvian influences, they did one song dedicated to los cucinares - the cooks - and managed to bring the place down. Smokin hot stuff. They would be the perfect duo to see in a tiny little club with a funkly little dance floor (read: The Orbit Room), where the mix of alcohol and intimacy would have people groovin like amateur Shakiras until the break of dawn. Good stuff for an opener, and as Blake put it: "totally city".

Patty came out sometime after nine to a massive ovation from the predominantly Lebanese-Thesbian crowd. She opened with a solo song in French on the piano, and then brought out the band to do what I considered to be the highlight of the show: a ridiculously brilliant cover of Sam Cooke's Get Yourself Another Fool. It was so awe inspiring and so unlike the Sam Cooke version that I didn't even realize it was the same song. I managed to find a commendable version of the same song on YouTube, taken from the Aladdin Theatre in Portland, OR in March. This is the way country is supposed to be done, all slowed down with the brushes on the drums and a sublime, textbook twang of electric guitar to call and respond with her voice... worth the price of admission alone.

She followed it up with the only song of hers that I knew (thanks to the wonders of satellite radio's Left of Centre {channel 26} and Disorder {channel 32}, an upbeat bluesy Cheryl Crow-esque track called Stay on The Ride (taken from Reg's Coffee House). Other highlights included a totally raucous version of No Bad News (this version, less raucous than last night's, is taken from a gig at The Lizard Lounge in Cambridge, MA in January), and a touching rendition of a song inspired by Dr. King's speech he gave the night before he was murdered in Memphis. The track is called Up To The Mountain, and it was almost enough to bring tears to your eyes.
By the way, apparently it is pretty easy to bootleg a Patty Griffin show, judging by the content available on YouTube. Can't imagine there was a lot of illegal activity going on during last night's show considering it was in a church and all, but maybe the good people of Toronto will surprise me with some video contraband.

All in all, it was a fantastic night. Even managed to drag my parents and Lisa and Blake out for a few pitchers at The Tap afterwards which, although one of my favourite places to chill and swill while watching the people cruising Bloor Street, was admittedly probably not the best choice for a quiet, apres-show beverage. But good times were had by all. Especially when we got back to my place for a wee shot of the MaCallan 17 year old Fine Oak and a viewing of The Last Waltz from which one of the above quotes was taken.

And finally, two questions immediately come to mind while perusing this article. The first and most obvious is: is this really a bad thing? Stronger, better pot for everyone? And really, 33.12% THC in the stuff confiscated in Oregon: the term BC Thunder immediately comes to mind.
And the second question is: how the hell do you sign up for the University of Mississippi's Marijuana Potency Project. I remember signing up for a Psychology experiment in University (we had to complete 10 of them, and this bad boy counted as 2) where I had to sit in a room and fill a half-litre glass vial with saliva. I was completely hung over from a night at The Brass that ended about three hours earlier, and because I was so dehydrated it took me about an hour-and-a-half to fill the jar. As I was finishing up, still drunk, I managed to knock my glass vial off the desk, and it shattered all over the floor. Let me tell you, picking up shards of glass in a pool of your alcohol-reeking saliva is just about the worst thing you can do for a hangover. The fact that I had to sit there and muster another 500ml of spit afterwards pretty well made it the worst morning of my life. But a marijuana potency project? That I could do. I always thought that Oxford, MS would be a great place to do some post-grad work.
Posted by Sean McCallum at 8:17 p.m.