Bring on the Bitch 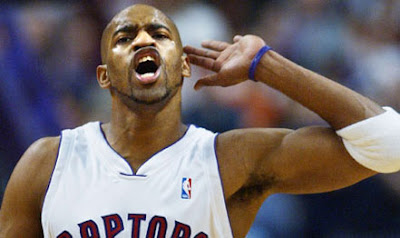 The Top 5 Reasons to Loathe V.C.

What the hell was with that "I don't want to dunk anymore"? There is significant evidence which suggests that he has since gone back on his word. I'm pretty sure dunk #9 on that list took place after the above statement was made. I mean, if you're gonna be a little bitch, at least have the courage of your convictions about it. Watching Vince dunk after vowing that he'd never do so again, I felt the way Lloyd Christmas must have felt after learning that Mary Swanson was married all along ("Husband? Wait a minute... What was all that 'one in a million' talk?")

O.K., I can't really fault him for that one. In fact, I actually applaud the man for finishing his degree, despite the fact that he has been financially set for life since he was 22. But was it really necessary to attend your commencement ceremony the morning before the biggest game in your franchise's history? You can't help but wonder whether, with fresher legs, Vincent Lamar might have drained that series-winning jumper.

This was a complete disgrace. And I know that Steve Javie was as much to blame as V.C., but the fact that Vince was actually laughing about it afterwards was enough to turn your stomach. A completely cowardly act. A real man would have admitted his wrongdoing afterwards rather than having the audacity to call Morris Peterson a friend...


2. Vince Carter is a Saboteur

The John Thompson interview was just about the last straw. To come out and say that you didn't give it 100% while playing in Toronto, presumably to expedite your exit from the city and the franchise that gave you everything, was about the most inexcusable thing any athlete has ever done in the history of this city. It made Dave Winfield's murdering of the seagul seem like a day at the petting zoo.

The fact that this happened in the same game as The Slap is enough to guarantee that V.C.'s reception tomorrow afternoon will be one of unparalleled abhorrence. I actually vomitted while downloading this clip.

- The way he writhes around on the floor so often that his teammates don't even care anymore.

- The fact that he's afraid to drive the lane and settles for lady-like outside jumpers.

- The fact that I can no longer feel proud about having witnessed this.


The following was taken from Bill Simmons online chat this afternoon:

Kmart, California: Raptors-Nets: Do you think any other arena is going to get as loud and angry as the Air Canada Centre, when Prince Carter steps on the floor? The city (Toronto) is in a frenzy.

Bill Simmons: Never. In NBA history, it will have only been topped once: Game 6 of the '86 Finals, the game after Sampson attacked Jerry Sichting and the Garden crowd unleashed about as much hatred as 15,000 fans could unleash in the following game (by the way, he had deer in the headlights and finished something like 2 for 15). People of Toronto, I urge you -- don't let up. The guy screwed you over. Don't let him beat you in the playoffs. You can singlehandedly affect the outcome of this series -- you can break him, he's not a tough player. You are doing this for every fanbase who ever got screwed over by a star athlete who went somewhere else and decided to start giving a crap again. That's your mission, now come through for us.

Should be one for the ages. See you at the ACC.
Posted by Sean McCallum at 9:15 p.m.