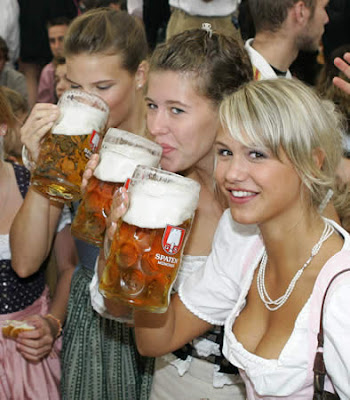 It's no secret that fantasy football/baseball/hockey/basketball has irrevocably changed the way we view professional sports. I can only speak for myself, but I honestly can't even fathom sitting down to watch NFL football hungover on a Sunday afternoon without my laptop by my side so I can track Chris Johnson's rushing yards and Quintin Mikell's tackles in the hopes that they help lead Frank Reich's Electric Groove to a week 8 victory over the likes of The 90210 All-Stars in the Natty Light Fantasy Football League. For better or worse, this is the sporting world we live in.
But is it conceivable that fantasy could change the way we drink beer?
My buddy Foley sent me the following email late this afternoon, and I gotta tell you: I'm all in. Where do I sign?

My buddy Joe and his idiot friends have come up with an absolutely glorious idea, which is the modern day extension of the Fantasy League for beer. A full blown spreadsheet is attached, and the rules are below, but the basic idea is sheer genius. Find a bar with 100 beers (this one has 104), have a draft, similar to any fantasy league, and draft the beers that you must drink for the evening. Nobody goes home until they have done their part, and every beer on tap has been accounted for. I truly believe this is blog worthy material. And I’m so in when we attempt this amongst our own collection of stupid friends.

(3) Once beers are drafted, each ath-a-leete can consume them in any order, as long as they consume them (please think, while it may Seem like a good idea to leave the Neustadt 10W30 Brown Ale to the end of the night I'm not sure that is a great idea)

(6) If a beer is unavailable then the person gets a free pick and can select a substitute of their choice.

The possibilities are virtually endless.

As a side note, I'll have you know that Neustadt 10W30 is brewed about 15 minutes from my parents' place (in the birthplace of John Diefenbaker), and it is quite delectable. Clearly a sleeper in this year's draft.
Posted by Sean McCallum at 5:21 p.m.

I play in many fantasy pools and have been involved in many drafts of sort. This is an absolutely brilliant idea. Whomever thought of this Fantasy League is near genius.

Hopefully there is a follow up as to how the League (night) goes!

finally a draft where I won't make an ass of myself with my lack of knowledge. i am in... moustache and all. We should do this at the end of movember.
--dvz

Dan, you are absolutely right. The only way to end Movember is by having a fantasy beer draft, and saving flavour from every one of those beers with our hideous dusters.

I'm thinking Friday, November 28... Somewhere in the City... The Bier Market is the obvious choice, but The Rhino has a better vibe (Parkdale) and close to the same quality/quantity of selection.

We'll get Foley to make up one of those spreadsheets and get on it.

Noooooooo! I'm out of the country at the end of Nov & beginning of Dec. I beg you to reschedule.

so in for this draft.