The Greatest Moment in Sports 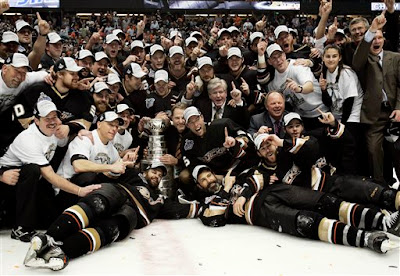 Really, there is nothing better than watching a team win the Stanley Cup. And when the Commissioner of your Fantasy Football League ("The Natty Light Football League", or NLFL) happens to be one of the guys hoisting the the most glorious trophy in all of sports, it takes on an even greater meaning.

Because of some copyright regulations, I wasn't able to put the actual video footage from CBC on this site, so you will have to do some work here on your own. But believe me, it is more than worth it. Particularly for those of you in the U.S. who weren't able to get the CBC feed.

Go to the following link:

Do yourself a favour and fast-forward to:


57:20 - and see Don Cherry compare the pride of Almonte, ON to the great Bobby Orr

2:47:25 - to see George Parros rub his moustache all over Lord Stanley's Mug before passing it on to Huskerdu

3:17:25 - to see Kent Huskins give what might one day go down as the greatest interview in live television history. This is truly what it's all about.


I have placed a request in to the man himself to give a recap of exactly what goes down tonight because, let's face it, the party in the hours after winning the Stanley Cup has to be right up there among the greatest parties one could ever dream of being a part of. I'd do anything to just be one of the reporters getting drenched in champagne. If he ever takes time out of his signing-pucks-in-order-to-be-sold-for-profit-on-Ebay gig, I'll be sure to pass it along.

Congratulations to Kent Huskins and The Anaheim Ducks. We couldn't be any happier for you.
Posted by Sean McCallum at 1:30 a.m.