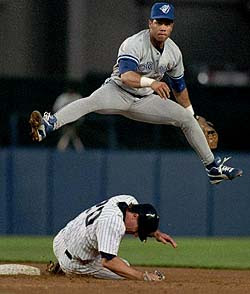 From ESPN.com
NEW YORK -- Andre Dawson was elected to the Hall of Fame, while Bert Blyleven and Roberto Alomar fell just short of earning baseball's highest honor.
Dawson, nicknamed "The Hawk," received 420 of 539 votes in voting announced Wednesday by the Baseball Writers' Association of America, 15 more than the 75 percent necessary to gain election.

The eight-time All-Star, appearing on the ballot for the ninth time, had fallen 44 votes short last year.
Blyleven had 400 votes, up from 338 last year, and likely will get in, what with two more tries on the BBWAA ballot.
Alomar received 397 votes in his first appearance, and was followed by Jack Morris with 282.

This is a travesty. Roberto Alomar was a 12-time all-star, the best middle infielder of his era, and the best player on 2 World Series winning teams. He should have been a no-brainer first ballot guy.
A complete joke.

Jeff Blair's take is solid. Check it out HERE.