Fun and Excitement in Winnipeg

Cornerback Adam Jones, released by the Dallas Cowboys in February, has agreed to a one-year deal with the Winnipeg Blue Bombers of the CFL...

The Cowboys acquired Jones from the Tennessee Titans during the draft in April 2008, after he was suspended by the league for the entire 2007 season following multiple off-field incidents while with the Titans.

But during the 2008 season, Jones was suspended for six games by the NFL after getting into an alcohol-related scuffle in October with a team-provided bodyguard at a Dallas hotel. He spent part of that suspension in an alcohol rehabilitation program.

Before going to Dallas, Jones was arrested six times and involved in 12 instances requiring police intervention after Tennessee drafted him in the first round in 2005...

But John Murphy, Winnipeg's director of player personnel, called the acquisition of Jones a "win-win" situation on and off the field, according to SI.com.

"... There isn't a better football player who's not in the NFL, at 25 years old, who's ready to play football, is going to play with a chip on his shoulder, and is going to bring some fun and excitement to our team, our locker room, our city, and our league."


Apparently the good people of Winnipeg have a different idea of what constitutes "fun and excitement".


In a related story, the Philadelphia Human Society is calling this "the perfect gift for the pooch that has it all": 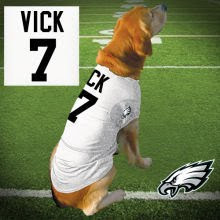