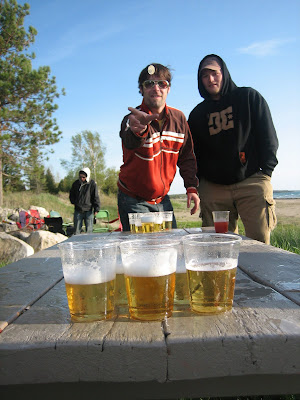 As most of you are well aware, the Canadian Beirut Championships go down this Saturday afternoon in the wilds of Dornoch, ON.

In the true spirit of the game, this competition will be a completely informal and disorganized affair. There will be no giant bristol board bracket drawn up in advance, there will be no seeding of teams, no discernible method for a team's elimination from the event, and now that I think of it, there is a very real possibility that my mom will shut down the entire proceedings after what she witnessed this past May 2-4 long weekend (she has already banished the esteemed funnel from enterring the premises). But nonetheless, with two kegs already on ice, a giant stack of red plastic cups waiting in the wings, and a dozen or so filthy quarters all ready to go, this promises to be a competition for the ages.

Team Ramrod are the early favourites at 6-5 odds, but Klutch Hutch has a history of coming up huge when it matters most (ie, Clarkson University), and the scouts salivate over his motor, meaning that whomever he is teamed with will have to be considered contenders. The early line on Team Hutch is 3-1. The Insiders darkhorse pick has to be any team that featuring WOSS standout Poopy D-Hib. Everyone understands D-Hib's athleticism and freakish wingspan, but what few realize is that this competitor actually outscored the single greatest basketball talent to ever come out of the GTA; Jamaal MaGloire; in the 1995 OFSAA basketball finals tournament. He's like a Polish Jesus Shuttleworth. Look for him to make some noise in this tournament.

In anticipation of the big event, I'm posting a little something I wrote about the game that made Potsdam, NY famous. If you don't know the intricacies of the game, you might find this helpful. Enjoy.

The origin of the game of Beirut has been traced all the way back to the rat-infested substructure of a place called The Crackhouse in Potsdam, NY, but the game itself is little more than a variation on the more popular contest most widely referred to as Beer Pong, a Jersey Shore institution if there ever was one. In Beirut, you begin with a long table and six cups half-filled with beer and set up at each end of the table in pyramid formation like so:

In a perfect world, you’d have a table that was approximately nine feet long, and a tall stack of those uniform red plastic beer cups, but it’s possible to make due with whatever is readily available, provided that throwing boundaries and minimum beer requirements are adjusted accordingly.
The game of Beirut is normally played in two teams of two, and the object of the game, aside from getting enormously drunk, is to sink all of your opponents’ cups. The fundamentals are a lot like basketball in that each team is trying to shoot an object through a sphere, but in Beirut you’re using a quarter instead of a ball, and you’re shooting into a beer cup instead of a meshed hoop; and the purpose of Beirut is to get everyone as drunk as is humanly possible rather than keeping track of the total number of points scored in order to determine a winner, so when you get right down to it, it actually isn’t like basketball at all. The only thing you really need to remember in Beirut is that whichever team sinks all six of its opponent’s cups first, wins.
The most notable difference between Beirut and Beer Pong lies in its instrument of play: in Beirut, a single American quarter is used, while those who play Beer Pong choose instead to use two ping pong balls, which they have the effeminating audacity to rinse after every toss. The rationalization behind choosing Beirut over Beer Pong; which is actually no rationalization at all; states that not only is it much more difficult to drain a quarter from nine feet than it is to sink two ping pong balls, but that the coin used in Beirut is, by nature, filthy and disgusting and infinitely more hazardous to your health than a rinsed plastic plaything, thereby making the Beirut player more of a man in some more or less ridiculous way.
In Beirut, each team stands at their own respective end of the table and shoots back and forth, one at a time, trying to land the quarter into their opponents’ cups. When you drain said quarter, a member of the opposing team has to drink the entire cup of beer, with the quarter still sunk in the bottom, before placing that cup upside down somewhere off to the side of the table. When the quarter drops from the empty, upside down cup, that team can then take their turn shooting. When a team gets down to three cups, they are required to consolidate those cups, reorganizing them into a smaller, 3-cup pyramid. The action goes back and forth in such a manner until one team has bombed all of the other team’s cups. After drinking its final beer, the losing team must then drink all of the winning team’s cups that they, the losers, have failed to sink. Winners go on, taking all challengers, no questions asked. Unlike Beer Pong, Beirut is always sudden death; there is no possibility for redemption or throwbacks or overtime. The team whose cups are sunk first are the losers, regardless of which team led off, who fucked up what order when, or who cut which doll’s hair off first.

It should be noted that the best part of Beirut, aside from the elite level of skilled competition, is the anything-goes taunting which at times seems to be a more fundamental part of the game than the quarter tossing or even the beer drinking itself. The virtues of your mother, your sister, your girlfriend, and particularly those with whom you may or may not have been intimately involved with will invariably come under rigorous scrutiny, the severity of the ragging inversely proportional to the number of cups remaining in play. Absolutely nothing is sacred in this playing-the-dozens-in-drunken-teams-of-two endeavor, where vomiting various vile verisimilitudinous vilifications is the rule rather than the exception. It is this ritualistic type of candidly comical character defamation that makes Beirut such a pleasure to watch and play.

A couple of other links:

Here is the Wikipedia entry for Beirut. The best part is the scientific schematic identifying the various shot techniques as if they were parabolic equations.

And finally, this video makes me wish I were back in college again. How could a night be better spent than making a YouTube video chronicling the greatest beer pong shots of all-time? I want that amount of free time back in my life. And a student loan to pay for it.
Posted by Sean McCallum at 3:49 p.m.