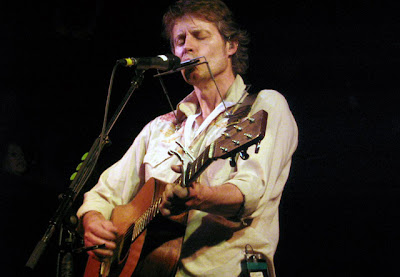 
And with those opening lines, with the entire crowd singing along on a Thursday night at 3:20 in the morning inside a past-capacity Lee's Palace with people still lined up outside in the hopes of getting in the door, Blue Rodeo officially supplanted The Tragically Hip as Canada's pre-eminent rock band.

In a night of ridiculously amazing talent on the stage at Lee's to open the North by North East Music Festival, the closing act somehow managed to top them all. With Jim Cuddy looking like a cross between my Unkle Mike and Jim Carey when he goes to look for Ray Finkle at Shady Acres (or as Sandra puts it: "the sexiest 50 year old on the planet"), and Greg Keelor somewhat less sexy but with an equally pitch perfect voice, the boys ran through a tour de force set list for fifty minutes as the crowd sang along to every glorious song.


Blue Rodeo is a lot like The Band in that you don't even know how many of their songs you know until you actually sit and listen to them bang out hit after beautiful hit, and this night was no exception. What Am I Doing Here, Til I Am Myself Again, Bad Timing.. 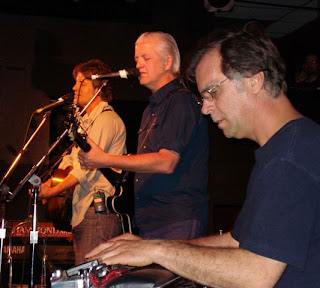 . When they came out for their encore and played Lost Together, I honestly felt like they could have played for another two hours and not a soul would have gone home, even though half the people in the building had to be awake for work in less than 4 hours (Cuddy had the line of the night when he said, after two or three songs: You know, we don't usually get up this early...). When Sandra, Sully and I got back to my place somewhere near 4:30 in the morning, it was just like in a movie because the birds were out in full force and we were still singing It Hasn't Hit Me Yet as we drunkenly bounded up the stairs (the girl who lives below us loved it). I can't remember that ever happening to me before. It was just that kind of a show.

But believe me, there was so much more to this night than just Blue Rodeo, although they were definitely a gigantic mother-f*ckin cherry on top of the Tony-Soprano-sized chocolate fudge sundae. Sandra and I showed up to Lee's Palace just before 10 o'clock on the recommendation of Matt Brown, Foley's buddy who has become my buddy and who works for Sony Music. Browner had some inside information on who the "Special Guests" were going to be in the 1am and 3am slots (Ron Sexsmith and Blue Rodeo), so we were sold on those two alone, but I know that the man has an impeccable ear for music and our tastes are pretty similar, so when he said he was showing up at Lee's at 7:30 and planting himself there for seven hours, we knew we had our plan for the night.

Walking into the bar, I quickly realized that calling Lee's establishment a "palace" is the architectual equivalent to calling the act that Gilbert Gottfried describes at Hugh Hefner's Roast "The Aristocrats" - really, it couldn't be any further from palatial, but a fantastic venue nonetheless.


The first act was Kathleen Edwards and she set the bar at a ridiculous height. She is an amazing songwriter and has fantastic stage presence, not to mention some beautiful lyrics, including the only known musical reference to Marty McSorley in the track "I Make the Dough but You Get the Glory". Her song "Back to Me" blew me away, and it was about the most rockin' song you could ever hope to have without the assistance of a drummer, and it instantly turned me into a fan for life. I missed a couple of songs because Sully showed up and I had to meet him out front because I somehow ended up with his wallet earlier in the day (long story), but the two of us made it back in time to hear her play Good Things, a slow song which left just about everyone with tears in their eyes as she implored us "don't get down/good things come when you stop waiting around... you just gotta stop looking". An absolutely beautiful performance.


It should also be mentioned that TSN's own Dave Hodge is a big Kathleen Edwards fan, and aside from being a champion of Canadian independent music, he's one of the nicest guys around. I spoke to him for a couple of minutes, congratulating him on being able to stay out so late. His response? "Some things are more important than work". Hence the famous CBC pencil flip. But I couldn't agree more. Sleep when you're dead.

Next up was Jim Bryson, a poor man's Wilco, but he had a couple of tracks that get better the more I've listened to them, primarily Feel Much Better and Somewhere Else. Jim was also the artist who gave the best description of exactly what Bob Harris from BBC 2 had done for the likes of him and everyone else on the bill on this night. It turns out that Bob is a huge fan of Canadian music, and has been playing these guys over in England for years. Jim tells the story of going to check his email at work one day (he didn't have internet access at home) and finding that he had about 15 emails from people in England saying that they'd just heard his song on the Bob Harris show and wondering where they could get his music... Fantastic story. Anyway, this night was a showcase of all of Bob's favourite Canadian bands and Bob was obviously supposed to be there to see it all go down, but he was diagnosed with prostate cancer just last month and wasn't able to make it over because of it. I don't know Bob, but he seems like a hell of a guy, so I'll definitely be pulling for him. Anyway, most of the Bob Harris showcase from Lee's Palace was broadcast on BBC Radio 2, and you can check it out here.

I think it was in the time between the Kathleen Edwards and Jim Bryson sets that Sully and Sandra decided that they were going to do a shot of Jagermeister after every band... I chose to politely decline this offer because I had to work the charity putting contest at a golf tournament the next morning with my two bosses, so I kept on with my steady diet of 1 Steam Whistle and 1 bottle of water; a revelation, really, because I didn't feel like a truck hit me the next morning and am actually able to recall some of what happened that night as I sit here writing about it. I'm not sure, but I think I might actually be on to something with this rehydration thing.

It was at about the same time as the Jager shots that we got talking to Gav and Lou, a fantastic couple from Glasgow whom Sully decided to go round for round with. It turns out they're in the band $outhpaw, and they were in town for NxNe and were playing at the Dakota Tavern on Saturday night. Sully and I would go outside with them for a smoke after every set, and they were the greatest people you could ever meet. Gav was loving my Stone Pony T-shirt, and the two of us kicked into an impromptu version of Springsteen's "Red Headed Woman" for his girlfriend Lou right there on Bloor Street. By the way, I had about 12 people comment on my Asbury Park T, which, in my mind, means that you're in a place where people know their music. I'm telling you, Lee's Palace on Thursday night was a who's-who of the Canadian music scene, and one of the best parts of standing outside between sets was watching cabs drop off band after band, all of whom had finished their sets and were coming to catch the end of the Bob Harris showcase. Of course Gav, the good Scotsman, knew just about everyone, so we just stood around outside drinking beers and waiting for the bouncers to take them away from us (which they kindly did).

Taking the stage at midnight was Justin Rutledge, a guy I was totally stoked to see. He's really just a kid (26 years old), but sings country songs like he's felt the pain of a thousand depression era boxcar riders. His band looks like a ragtag bunch of misfits (I'm pretty sure his drummer was Balki Bartokomous with a beard), but they play country the way its supposed to be played. His voice reminds me of Steve Earle's, which is never a bad thing, and the line of his that goes "Too sober to sleep / I'm too drunk to cry" tells you just about everything you need to know about what kind of a songwriter he is. God bless garage bands in the basement. And God bless garage bands on the stage.

The 1 o'clock slot was reserved for Ron Sexsmith, the first special guest of the night. What more can you say about Sexsmith than the fact that he's Canadian music royalty? He opened with the only song ever written about Lebanon, Tennessee, and followed it up with songs showcasing that amazing voice of his. I still think Secret Heart is one of the most beautiful songs ever written. By the end of the set, Sandra and I were doing the "Ahh-RONNNNNNIE" thing that is usually reserved for my brother. Good times all around.

At two o'clock, Luke Doucet and Melissa McClelland climbed onto the stage. The two of them are usually billed as solo artists (and they're married to one another, I would la 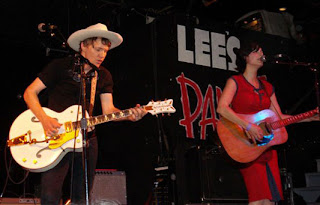 ter learn, despite Sully's insistence that Melissa was consistently eye-F'ing him throughout the duration of her set), but decided to share the stage on this special night. The two things that stood out the most about their gig was Luke's guitar, and Melissa's dress. It looked like Luke had a 63 Cadillac strapped across his chest, and Melissa's dress was enough to have Sully fall in love with her on the spot. Doucet's track Broken One was pretty stellar ("you gotta have a heart to have a broken one), and McClelland's Passenger 24 was solid, but to be totally honest, I was pretty drunk by that point, and I could only think of the guitar and the dress.

And then it was the aforementioned Blue Rodeo gig. Taken as a totallity, this was one of the best shows I've ever been to. Just a magical night all around. And perhaps the best part of it was that there were two more nights to go.
Posted by Sean McCallum at 6:32 p.m.

Thanks for the gross overstatement of my musical knowledge and/or tastes. Great summary of a spectacular show. We need to trade notes on music a bit more as I suspect we've both got a few gems in our collections that the other doesn't know about.

I hope to see some posts on the rest of the weekend (if for no other reason than because I'm not entirely sure what transpired on Saturday night!)