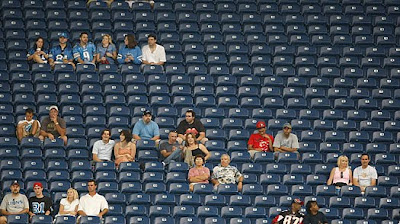 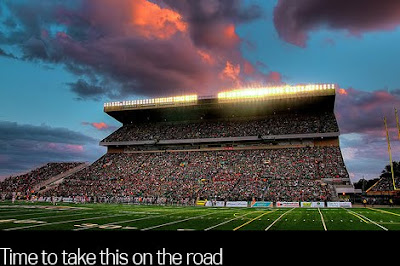 At some point during the Buffalo Bills - Cleveland Browns Week 5 matchup earlier this year (a 6-3 Browns win which was easily one of the worst professional sporting events I've ever witnessed), my buddy Dinner texted me with the following revelation: "These two teams belong in the CFL".
And though Cleveland and Buffalo have managed to "turn their seasons around"; meaning that they're no longer in the running for the worst team in the league; the idea of an NFL relegation system has stuck with me for the duration of this football season. (You see, these are the things that happen when you are a Bills fan. Any hope of a playoff berth is gone after the first month of the season, so you're forced to think about other things in order to keep your sanity. This sad reality is great for creative purposes; not so great for the well-being of your liver).
As we all know, Week 17 in the NFL can be a pretty uneventful day. Most of the playoff spots are locked up, most of the playoff teams are happy with their seeding and are consequently content to rest most of their starters, and most fantasy leagues have awarded their heavyweight championship belt by the end of Week 16. Furthermore, any team with a shot at landing the #1 pick in the NFL draft; particularly in a draft year which includes a legitimate no-brainer stud pick like Ndamukong Suh; is doing everything they can to ensure that they keep that pick.
So how do you make today's 49ers-Rams (1-14) and Bears-Lions (2-13) games more interesting?
Relegation.
Meaning that the team with the worst record in the NFL plays in the CFL next year.

Think about it: how much harder do these guys play if they know that a loss means they'll be playing half their games in places like Regina, Saskatchewan, and Edmonton, Alberta next year? (Today's gametime temperature in each city: -14 degrees)
And don't tell me that the idea of an NFL team playing in the CFL isn't feasible. Because if Major League Baseball can have interleague play with different rules based on where the game is being played (let alone a World Series in which the rules shift from game to game!), there's no reason that the Rams couldn't play in a league where their road games featured more real estate, 3 downs, and 12 men on the field... And if you don't think the CFL players would be chomping at the bit to try to prove themselves at the Edward Jones Dome, playing by NFL rules against guys making 10 times more money than them, then you're kidding yourself.
But perhaps what is most intriguing about this potential scenario is the thought of seeing the winner of the Grey Cup each year getting their shot to play with the big boys in the NFL. How great would it be to see Larry Fitzgerald and the Arizona Cardinals playing at Molson Stadium... in December! Or better yet, if the Rams were somehow able to beat the 49ers today, it would set up a potential 1-game relegation play-in game between the Rams and the Lions (don't kid yourself: the ratings for this game would be through the roof). And if the Rams were somehow able to beat the Lions in this play-in game, the 2009 Grey Cup Champion Montreal Alouettes would be slotted into the NFC North, meaning that the likes of the Vikings, Packers, and Bears would be paying a visit to Montreal next year.
There's literally nothing about a CFL-NFL relegation system that doesn't improve each of the respective leagues, and more importantly, the weekly on-field action.
Of course, the obvious argument is that a CFL team wouldn't stand a chance in an NFL stadium. But is a potentially putrid Alouettes team really going to by that much worse to watch than an already putrid Rams team? And furthermore, I'd argue that the homefield advantage of the CFL team, playing with 3 downs and 12 players, would be enough to make up for much of the discrepancy in talent.
As for that discrepancy in talent, you need look no further than the stats of Ricky Williams to determine that the gap probably isn't as great as you might think. In 2006 with the Argos, Williams rushed for 526 yards on 109 carries (4.8 avg.) with 2 TDs. This year with the Dolphins (through 15 games), Williams has rushed for 1090 yards on 229 carries (4.8 avg.) with 11 TDs.

Throw the CFL team a percentage of the relegated NFL team's TV revenue (in 2008, each NFL team received $77 million in National TV revenue alone - 25% of that money would make a world of difference to a CFL franchise, allowing them to sign some key NFL free agents for the upcoming year), and there's no reason that, financially speaking, a relegation system couldn't work. So is it time to revisit the NFL-CFL Co-Operative Agreement, and to put the EPL idea of NFL Relegation on the table? I say yes. Absolutely.
As for getting NFL teams to agree to playing a year (at least) north of the border? That would be another story.

But for the time being, it's a wonderful idea to ponder: a world in which the Grey Cup Champion earns a shot at the big boys in the NFL, and the Rams and Lions Week 17 games have more meaning and intensity than any game either franchise has played in the past 5 years.
Posted by Sean McCallum at 11:42 a.m.

Hey! Good topic, but will this really work?

Guy
You have got to see this. Obama playing on XBox. Funniest video ever. http://bit.ly/bllhx1

To Take part casino games all through On-line, it does not need you to be peculiarly warrant but Jackpot Party you're in with a chance to trigger the kitty party Progressive. [url=http://www.onlinecasinotaste.co.uk/]online casino[/url] casinos online You are able-bodied to recreate these th ba trong tr baccarat: PlayerGi Tr Ca Hai L Bi u Tin: 0 1 2 3 4 5Rt mt l. http://www.onlinecasinoburger.co.uk/