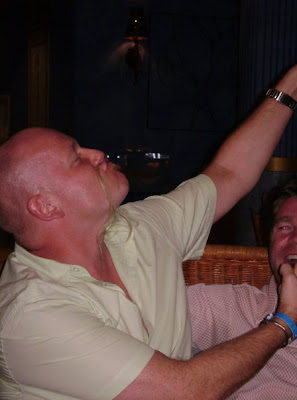 As far as 30-day stretches go, November was a pretty life-altering month for me. I spent two-and-a-half weeks in Peru drinking hallucinagenic herbal concoctions that made me believe that I was dead. I received a frantic phone call one afternoon informing me that there had been a terrorist attack targetting Canadians in the country where a loved one was currently travelling (she's fine). And I had to sit back and helplessly watch as the Buffalo Bills blew a seemingly insurmountable lead in the AFC East, the Edmund-Fitzgerald-like culmination coming in the form of an eviscerating Norwood-esque flashback in front of a national audience.
But perhaps none of these considerable occurrences were as singularly transforming as the experience of growing a moustache.
I really am a new man for having grown one. Therefore, as a service to those who have never had the transmogrifying experience of nurturing a duster, I present to you:

The Top-10 Best Things about Growing a Moustache

10 - Growing a Moustache is a Vacation from Yourself.
It really is. Throughout the entire month of Movember, I felt like I was walking around in a Halloween costume. I was saying and doing things I would never otherwise say or do, without any fear of social repercussions. I was incognito. I was taking the bus to Hamilton on a Saturday night and asking random strangers for a ride to a party (with success). I was instigating living room moshpits that would spill out into the snow at house parties in Barrie, ON. I was averaging two goals a game in the OTHL while sporting the 'stache. Basically, I was an entirely new man. And to be honest, now that he's gone, I kind of miss him.

9 - A Moustachioed Man Commands a Certain Level of Respect.
It's true. I noticed this fact upon returning to Toronto. I was walking out of the supermarket one sunny afternoon, and where I'm usually the first one to step aside and give someone else the right-of-way, it was blatantly obvious that people were getting out of my way. It was as if they thought I was a member of the Hell's Angels or something... Although, I suppose it could have just as easily been that they assumed I was a convicted sex offender and wanted nothing to do with me.
(As a side note, the whole "commanding respect" thing works in every instance except for those instances where you happen to bump into people who knew you in your pre-Burt-Reynolds incarnation. I'm thinking specifically of the girls who work at my local coffee shop, who would literally laugh their asses off every time I walked through the door. Thanks ladies.)

8 - Exchanging the Moustache Nod.
This may or may not only happen in the month of Movember, but there is nothing better than walking down the street, being all self-conscious about the fact that you look like a sexual predator and the Starbucks girls have just spent the past five minutes making you feel like you did in the seventh grade, and then all of a sudden, spotting one of your fellow comrades on the horizon. He knows what you've been going through. He understands your pain. And the two of you exchange the nod. It is a small victory. One of those beautiful moments that demands neither words nor explanation. 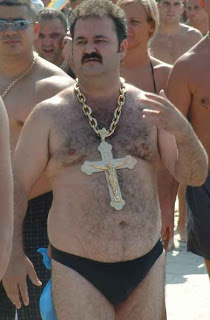 It's more fun than you'd think to come up with excuses for why you're growing a moustache. The obvious favourite this month was the whole Wendel Clark tribute angle, but looking a girl you've just met deadpan in the eye and telling her that you're growing a moustache because you're of the opinion that women secretly find it sexually arousing is the highest of high comedy. I mean, just look at this guy: he's practically dripping with sex appeal.

6 - Rolling Out the All-Pedophile Rotation on the Hardwood
The City All-Stars had 3 players rocking the 'stache, and let me just say that when we hit the floor as a unit, there was simply no stopping us. The opposition was intimidated. They were terrified... They were laughing their asses off. It was like Rambis, Frazier, and Jackson out there... Except, you know... without the game.

5 - The Unexpected Mo-Bro
I was back at work with my 'stache for a total of two weeks, and on a number of occassions, had relatively important meetings scheduled with quasi-prominent public officials whom I hadn't previously met face to face. For each of these meetings, I'd be going in completely self-conscious, knowing full well that I looked like a complete idiot. As a result, the first thing I always planned on saying was something to the effect of: "I have to apologize for the moustache. You know, it's this charity thing and we're all doing it for a good cause..."
So you can imagine my delight upon walking into some of these meetings only to have my counterpart be sporting one of those graying moustaches that he'd clearly been rocking for the past 20 years.
My long lost Mo-Bro! I'll be damned if a few of them didn't give me the nod.

4 - Taking the Self-Portrait Photograph in a Socially Unacceptable Locale
I'm thinking specifically of this shot. It probably would have been a better photograph if I'd been able to convince someone to snap it for me, but I just couldn't bring myself to do it. I guess there are some things a man just needs to do on his own.
I'm still trying to decide whether or not it's funny... 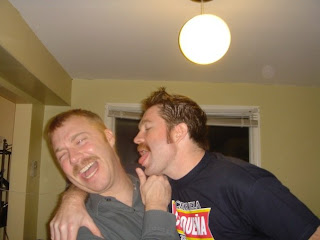 rvice to yourself, the team, and to the Prostate Cancer Research Foundation of Canada. So as team captain, I took it upon myself to extend the offer to everyone.
Free Moustache Rides Offered: 457
Free Moustache Rides Accepted: 0
It should be noted that the closest I came was on Saturday night, with my buddy Skeeter. As you can tell by the photo, he was 50/50.

2 - Being Mistaken for a Celebrity
So, I'd just that morning trimmed my handlebars for the more conventional loo 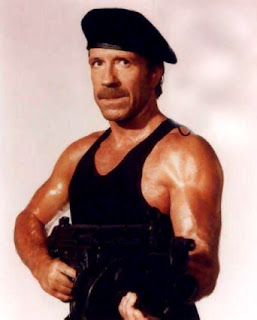 king moustache. I had an important meeting that day, and wanted to look as professional as possible. So I was a little down on myself, feeling like I'd somehow sold myself out by losing the bars. I felt like I'd lost some of my moustache mojo.
After my meeting was over, I got into my car and pulled up to the parking attendant to pay my tab. The man working the gate was clearly not from Canada, and English probably wasn't even his third language.
He took one look at me and said: "Hey! Chuck Norris!"
It was obviously the finest compliment I'd ever received.

1 - Raising Money For Prostate Cancer Research
At the end of the day, after all of the laughs and camraderie of looking like a bunch of idiots together, Movember really is a great fundraiser. The Free Moustache Rides were able to raise over $1,300 for prostate cancer resear ch, and you wouldn't know it by looking at his lackluster-duster in this photo, but Mike Foley (second from the right) helped Captain the MO CIBC World Markets Team, which raised more than $125,000 - more money than any other team in Canada.
So a huge thanks goes out to everyone who supported the cause, particularly those dotcomrades whom I've never met but donated based on the blog entries alone. You guys are awesome.
Looking forward to rocking it again next Movember.
Posted by Sean McCallum at 7:59 p.m.

the first pic is classic!