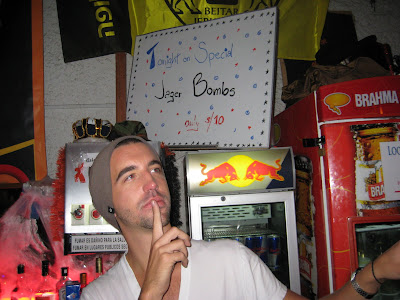 This story begins and ends with the above photo. You´ll notice that is says: ¨Tonight on Special - Jager Bombs: S/10¨. Ten Peruvian Soles is the equivalent to $3. Any time you´re staying in a hostel where the bar is serving $3 Jager Bombs, things are bound to spin out of control quickly. Especially in light of the fact that the bartender you see there was masquerading as the devil on Halloween, refusing to serve me a beer unless I ordered a Jager Bomb to chase it. Let´s just say that it was a long night
But before all of that Halloween debauchery, there was a great deal more debauchery in the great city of Lima, Peru.

I got into town sometime after 11:30 on Thursday night and immediately got scammed into paying too much for the cab that took me to my hostel (we agreed on $35. I tho 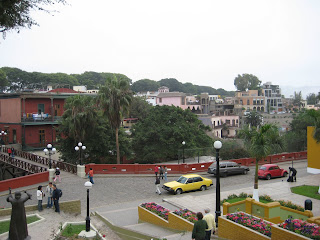 ught we were talking Soles, but apparently we were talking US$. Live and learn). As soon as I stepped foot into the hostel (The Point), I knew the place was probably a good choice. The hostel´s bar (called ¨The Pointless Bar¨) was absolutely hopping, with a wild and crazy drinking game in full flight (Horse Races - pretty much the all-time ice breaker), some dude from Oregon standing up on the bar and telling the ¨jam/jelly¨ joke, non stop Michael Jackson blaring from the stereo, and more big Brahmas than I´d care to mention. There were also multiple double shots of Jagermeister. Having been up since 6 in the morning and flying all day, and afer having flown from Newfoundland the day before, it didn´t take long before I was completely and utterly intoxicated.

A big group of us eventually ventured off to a discoteca in Miraflores, but the bar was the exact opposite of my scene, so I ended up pulling a Houdini and slipping out the back door, jumping in a cab by myself and having the cabbie take me to the bar that the dude I sat next to on the plane recommended. It was called ¨Sargento Pimienta¨ (Sgt. Pepper´s), and it was full of great rock and roll music (the Beatles, the Stones, Manfred Mann, the Animals...), sweaty locals, and 1 litre Cristals... Everything a guy could want, except for the fact that I was by myself and my Spanish is abysmal. I pounded back most of my litre beer and then stepped out into the misty Limean night, traveller in hand. I walked the 10 minutes back to my hostel, stopping only to help push start some dude´s VW bug (I know the feeling all too well - I was literally running down the street, pushing this guy´s car with two other strangers, my beer sloshing all over me as we giggled like school girls). I also grabbed a glorious hamburgesa from a storefront grill. All in all, it was a pretty successful first 5 hours in Lima. 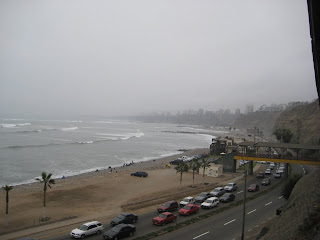 ver (I slept until noon in the dorm room I had all to my lonesome), and then trying to book myself a flight to Iquitos. I had to walk halfway across the city to Miraflores in order to book my ticket (my hostel was in a neighbourhood called Barranco, and believe it or not, there isn´t a single travel agency in the entire hood), but it was a perfect afternoon, and it was hilarious seeing all of the little kids out trick-or-treating. Apparently in Lima, they trick-or-treat during the day as well as at night. And from what I could gather, they don´t really go house-to-house, but instead go store-to-store. They also don´t say ¨trick or treat¨; they just basically yell ¨HALLOWEEEEEEN!!!!¨ when they get to the door. Good times.

After booking my ticket and walking back home, I went for dinner at a fantastic little local cafe with three dudes from my hostel (Brooklyn James, Oregon Matt, and Calgary Dave, who had been travelling for an astounding 26 months and was going home that night - after travelling the world in search of exotic women, I can´t imagine he envisioned his last meal with the likes of us... that has to rank right up there with one of the all-time let downs). The arroz con camarones (rice and shrimp) was out of this world, as was the extra large Cusquena. Life is just way too good sometimes. After dinner, I shut it down for a much needed two hour power nap, and when I woke up, the hostel bar was in the middle of throwing a ridiculously raucous Halloween party. Full DJ set up, decorations out the wazoo, costumes for everyone... They even supplied me with a werewolf mask. I supplied the accompanying chest hair, but that´s really another story. 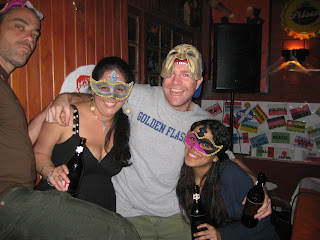 I´m ashamed to say that I didn´t even make it out to the discoteca on Halloween night. In my defence, they didn´t leave to go out until 3am, and by that point I didn´t even know my own name. I passed out in my dorm where on the next bed over, there was an Argentinian dude who was out cold, fully clothed, face down, shoes still on. I have no idea whether or not he was alive.


Which brings us to today. It was your basic, run-of-the-mill, ho-hum Limean morning. Woke up with a screaming hangover, drank cups and cups of coffee at the hostel bar, went around the corner for freshly squeezed juice, and then sat through an earthquake.

Yeah, that´s right. We were sitting there watching Zorro in Spanish this afternoon, and all of a sudden you could hear the birds outside going crazy, and the next thing we knew, the entire building was shaking from the ground up. Totally surreal. I honestly don´t think I´ve ever moved fast as I did when I heard the ceiling begin to crack. Just totally insane.

Two hours later I was in a cab on my way to the airport, careening down the highway that was littered with large-ish rocks that had slid down the cliffside during the quake. Everything was going along smoothly until our cabbie, tailgating ever so close, crashed into the back of the car in front of us, crumpling his hood in the process. In full accordance with Per 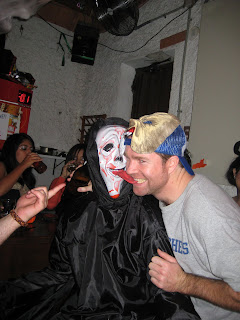 uvian law, not only did this cabbie not exchange information with the guy he hit, he didn´t even stop the car. Just kept driving as if nothing happened.

I fucking love this place.


A couple more notes on the trip so far.

- I love the people you meet when you´re travelling. For example, I was talking to this older dude (probably mid-50´s), originally from Maine, who decided that he was leaving the U.S. after George W. Bush was elected. He spent 5 years travelling the world, and eventually settled in the mountains about 7 hours outside of Lima. He paid $600 for his land (he lives on a river in the mountains), and then built his house for $300. Unbelievable. And he comes into Lima every month to trade books and buy weed (50 Soles per ounce... Yeah, that´s less than $20 an ounce).

- When you check out of a hostel and your bar bill is twice the cost of your stay, you know you´ve had a solid couple of nights.

- When I landed in Iquitos tonight, I jumped on the back of a mototaxi and on the drive into town, we passed a family cruising down the street on their motorcycle: father, mother, and infant, all three of them on one motorcycle, all three of them not wearing helmets. You honestly can´t make this stuff up.

- When you´re travelling alone, it´s tough to get yourself into photos taken with your own camera. These are literally the only pictures I´m in. This fact, among countless others, makes you really appreciate your former travelling companion.
Posted by Sean McCallum at 11:33 p.m.

Are you wearing your throwback Spo's lid??

I think my eyes are sweating.

Sounds like too much fun. Keep up the good work.

Decisively not living the dream back in The City,

P.S. I may have topped your Hooters outfit for most offensive and disturbing Halloween costume. And I only knew six people of the 60 at the party. Stay tuned to facebook for more details.

I am actually sporting a throwback Jays lid, but I think the nostalgic effect should be about the same.

I need to see a costume that can top the Hooters outfit for hideousness/surefire-pedophilia-accusation.

sounds like a blast, remember to take some pics of your dirty stache, i already got quite the peter growing... sheera hates me.

Sean, I will admit, your last comment left me a little tear-eyed.... I'm so glad you're enjoying yourself. Be safe! xo