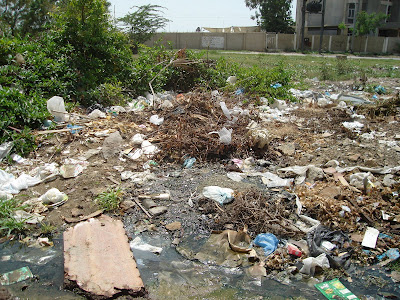 The cupboard beneath my kitchen sink is overflowing with them, and their mere presence in my house is the bane of my existence. We bought one of those clever containers from Ikea that are allegedly designed to neatly store an inordinate number of them in a tastefully decorative hideaway cylinder, but the ridiculous contraption never stood a chance. I try telling the girl with the eyebrow piercing at the local supermarket checkout that I'm OK and don't need one this time around, flashing her my moderately hip reusable cloth shopping bag with the slogan: "This is my Green Bag" tatooed across its face. I even bring bags filled with them to the old Korean lady who runs the fruit stand on the corner and never seems to have any of her own. I try stuffing them by the armful into the recycling box, but it never seems to make any difference. My cupboard's supply keeps growing, seemingly exponentially. My world is being overrun by plastic bags.

I came across a statistic today that actually made me utter aloud the exasperation: "What the fuck?!?!?" And that stastistical fact was: we produce approximately five trillion plastic bags each year. Five TRILLION?!?!? What the ?!?!? That's a 5 with 12 zeros behind it. That's 5,000,000,000,000 plastic bags!!! It's a number so long that, when written numerically, it doesn't even look like a number. Five trillion plastic bags A YEAR? Is this really necessary?

I'm not sure if you're aware of what goes into the making of a plastic bag, so here's a refresher for you: plastic bags are made with oil. Plastic bags start as crude oil, are transformed into polymers, and are eventually heated, shaped, and cooled. It is estimated that 12 million barrels of oil went into producing the 100 billion plastic bags that were used in the U.S. last year. Extrapolated to the number of bags produced worldwide (the small matter of that 5 trillion), that equates to roughly 600 million barrels of oil being consumed annually in order to produce our supply of plastic bags. Does this all seem a little extravagant to you?

Now, don't get me wrong: there is definitely a place in our world for the plastic bag. The plastic bag was a great invention, and it continues to be a great product. They're a higher quality bag than their paper cousin. They're much more durable and long lasting (some might say too long lasting), they're waterproof, they're recyclable... Lord knows they're great for lining garbage cans and for picking up dog shit with. I'm not calling for the banning of plastic bags. But what I am saying is that maybe we need to reconsider how many plastic bags we need. Because there's no way we need 5 trillion new plastic bags every year.

Plastic bag sympathizers will tell you that plastic bags are better than paper bags because they're recyclable. One problem with this argument is that it is estimated that less than 1% of plastic bags in the U.S. are recycled (0.6%, to be exact), making that rationalization a virutal moot point. Another problem with this argument is that I'm not saying that we should be reverting back to a paper bag society; what I'm saying is that we should be curtailing our plastic bag consumption in a major way.

Here are a few reasons why (statistics taken from The Bag Beast, by Michael Jessen):


- Every year more than 6 million tonnes of rubbish is dumped into the world’s oceans. In every square mile of ocean it is estimated that there are over 46,000 pieces of plastic.

- Well over a billion single-use plastic bags are given out for free every day.

- Each year, Americans throw away some 100 billion polyethylene plastic bags. Only 0.6 percent of plastic bags are recycled.

- Collection, hauling and disposal of plastic bag waste create an additional environmental impact. An estimated 8 billion pounds of plastic bags, wraps and sacks enter the waste stream every year in the US alone, putting an unnecessary burden on diminishing landfill space and causing air pollution if incinerated.

- In a landfill, plastic bags take up to 1,000 years to biodegrade. As litter, they break down into tiny bits, contaminating both soil and water.

But perhaps most telling, and certainly most terrifying of all, is the following story, recounted by Captain Charles Moore.

After finishing the 1997 Los Angeles-to-Hawaii sail race known as the Transpac, Captain Moore and the crew of the Alguita sailed through the North Pacific subtropical gyre – the great high-pressure system in the central Pacific Ocean that, most of the time, is centred halfway between Hawaii and the mainland North America.

"I often struggle to find words that will communicate the vastness of the Pacific Ocean to people who have never been to sea," wrote Moore. "Day after day, Algulita was the only vehicle on a highway without landmarks, stretching from horizon to horizon. Yet as I gazed from the deck at the surface of what ought to have been a pristine ocean, I was confronted, as far as the eye could see, with the sight of plastic".

"It seemed unbelievable, but I never found a clear spot. In the week it took to cross the subtropical high, no matter what time of day I looked, plastic debris was floating everywhere: bottles, bottle caps, wrappers, fragments. Months later, after I discussed what I had seen with the oceanographer Curtis Ebbesmeyer, perhaps the world's leading expert on flotsam, he began referring to the area as the "eastern garbage patch." But "patch" doesn't begin to convey the reality. Ebbesmeyer has estimated that the area, nearly covered with floating plastic debris, is roughly the size of Texas."


Is there any answer for this type of astounding disregard for the natural environment? Ireland might be on the right track with a solution. In March of 2002, the Irish government implemented a $0.15 "plas tax" on each plastic bag used at the checkout counter. As you might expect, the results were almost immediate. People began bringing their small portions of their cupboards-supply of existing plastic bags to the supermarket to avoid paying the "green nanny state" imposed tariff. They not only purchased those large, durable, reusable cloth shopping bags, but they actually used them for bringin their groceries home. It is estimated that the "plas tax" cut plastic bag consumption by some 95% in Ireland, and in turn raised $9.6 million dollars in its inaugural year; a sum of money which the Irish government currently has earmarked for "green" waste management and environmental initiatives.

Imagine: less plastic bags, and more money for recycling, clean water, and green roof initiatives. Finally, a tax that we can all get behind.


Don't get me wong: by no means is a reduction in the number of plastic bags the cure for all that ails this planet. But it's a start. Maybe we reduce production from 5 trillion to 1 trillion, and then from 1 trillion to 500 billion... They seem like large steps, I know, but they're steps in the right direction. And they're steps that can be easily taken.

Don't be an idiot by throwing your plastic shit on the ground, or worse yet, in the water. Buy yourself one of those sufficiently sophisitcated, extra large cloth shopping bags you see all of the young hipsters walking the city streets with. And say "no thanks" the next time you go to the corner store and realize you're a responsible adult and quite capable of carrying that loaf of bread with your bare hands (it is, afterall, already packaged in one bag).
Posted by Sean McCallum at 10:18 p.m.

I've been meaning to get me one of them there bags to reduce, re-use, and recycyle with but now I ACTUALLY will. Because 5 Trillion is riiiiidiculous.

if you go to bigger supermarkets, loblaws I think, they have the hard plastic bins... I leave mine in the car, along with a few fabric sacs for quick trips. But they're great. Today was actually the first day in well over a month I got a plastic bag from the store out of habit alone. Once I got outside I was mad at myself. and then my eyes started sweating - as my tears hit the ground they cured pollution.

*the last sentence may not be accurate

I'm just hoping I die before the Earth does.