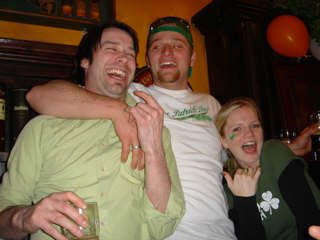 It's always tough to come back after a weekend like the one we just had: 36 hours of basketball-watching, 18 consecutive hours of drinking, about six hours of sleep... But before getting into the St. Patty's Day debauchery, just a few quick notes on the tournament.

It may have been a little presumptuous of me to refer to the Tennessee B-ball squad as overrated considering I'd only seen them in action once this year, and that was a game in which they completely annihilated a Vanderbilt team that I picked to go to the Sweet-16. Obviously, I should have taken that into consideration. As is often the case, the so-called experts that I found myself reading and listening to didn't really turn out to be experts at all. Idiot. I should really go back to picking teams based on their mascots (thereby taking UCSC to the final every year because their team name is The Banana Slugs. The good news is that Ronnie bagged $50 off the Vols win (they only managed to cover the spread by 27 points), and with my big money wager on UNLV, I managed to somehow break even, a fitting outcome that won't tempt me into breaking the rule I currently have which states that I can't bet on sports unless I, or somebody I'm related to, am in Vegas to do so. Good, clean, healthy living.

I was pretty disappointed by the lack of upsets in the first two rounds, and not only because I had VCU (11), O.D.U. (12), Long Beach State (12) in the sweet-16; but because the big-time upsets are usually what the first weekend is all about. Could there ever be anything better than watching George Mason beat UConn last year to reach the final four? To be honest, I couldn't tell you because I was sitting next to a total stranger on a six-hour bus ride through the mountains of Ecuador for that entire game, left only to repeatedly smash my head against the window with the knowledge that I would give my right arm to be sitting in a Motel 6 somewhere on the outskirts of Akron, watching the game on cable. But I digress. Despite the lack of Cinderella sightings this year, there were some pretty decent games that went down to the wire; it's just too bad that most of these took place on Saturday when I was too drunk to realize that a world might actually exist beyond the four pints of Guiness I had constantly lined up in front of me all day and night.
Despite the fact that Foley and I didn't exactly get around to buying eachother the drinks we owe one another (see above sentence), I managed to keep 7 of my 8 elite eight teams alive (only losing Texas), and all 4 of my final four teams. So there's a good chance the man may owe me more than a few by the time it's all said and done.

On Friday afternoon, I couldn't resist emailing the great Mike Jarvis, just to see if I could get a rise out of him. Somebody beat me to the Artest question (he handled it like the diplomatic gentleman that he is), so I came back a little later on with something else. The following exchange actually took place, via email:

If you're in town for the weekend, what are your plans for St. Patrick's day? As a huge St. John's fan, I'd love to be able to buy you a drink for that fantastic run in '99.

The question obviously never made it to air, but I happen to know a girl who works in the newsroom at The Score, and she instantly recognized that the question, in all likelihood, came from her Johnnies-obsessed ex-boyfriend. She emailed me back later with the following response.

Talked to Coach about going for a drink- he said, “male or female?” I said…”male”… he responded “nawwwwwwwwww” 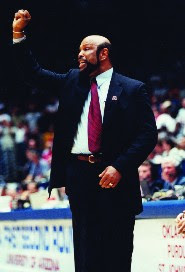 As for St. Patrick's Day, as usual, it began early for me. Up at the crack of 10 for a wee shot of McCallum (for Bob), and then off to Hurricane's to drop Sandra off at work. Had a lovely wee fry at the 'cane, along with a Jameson on the rocks, and then it was off to Vera's place to pick up Sully. By that point, Nate was already at The Pour House holding down the fort like the dedicated St. Patty's Day soldier that he is. Sully and I split a Guinness at Vera's, and then she dropped us off at the bar where we were already feelin' fine and green. It was a little before 1pm.

We managed to grab another table next to Nate, and the result was ou 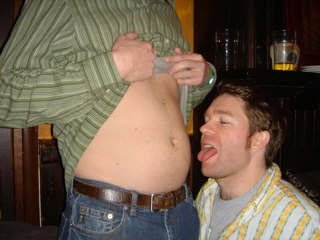 r own little section next to the bar's fireplace and within close proximity to both the bathroons and the TVs (they had soccer on in the beginning, but we managed to get that changed to hoops in a hurry). From there, things are a little blurry. I was in on a tab with Sully, which is never the best idea, as evidenced by the fact that our waitress came by at 7 pm with our bill, after which we handed her $250 without thinking twice. I have no idea how many pints we had, but at some point I thought it would be a good idea to get a picture taken of me licking Skeeter's belly. So apparently I had more than was necessary.

My sister and Blake showed up (my sister all the way from Nashville, Blake from Guelph), as well as most of the annual regulars: Nate and Jen, Dunner and his Sis, Foley and the Dish, Skeeter and his aforementioned belly... There was even an Edleman there, mind you it was not Uncle Johnny and his March 17th birthday-boy debauchery; but instead Rick, who after waiting in line for three hours (they tented off the patio and made it a licensed line), finally made it into the bar completely smashed. T-Dogg was representing the girls from HOWSE, and Santos was representing Portugal. A throwback version of Damen even made an appearance, and he was in as fine a form as ever, falling old-skool and shit-canned ass-over-tea-kettle in the booth during the Leafs-Habs shootout and remaining stuck between the table and chair for the rest of the game with his feet sticking straight up in the air, everybody too busy pissing themselves to help him up. Ronnie phoned in from Vegas in the middle of it all to get in on the action, and I meant to drop Flats a line because we were supposed to be down there with him getting ridiculous on Chowda and Sam Adams, but the fact was that The Pour House wasn't exactly con 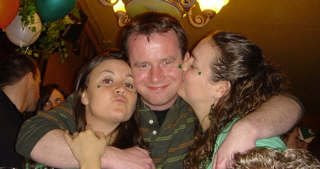 ducive to phone conversations, so I never got around to it. I also meant to call my Grandma that day and didn't manage to do so. Ditto for my parents. Just blame it on tha drink.

The one bad part of the night was that Lisa and Trish ended up having money stolen out of their purses. I have no idea how this happened because we were all standing and sitting right there and their purses were in the booth the entire time. I'm still totally dumbfounded by how it happened, but it would have been worth it all if Blake had somehow managed to find out who dunnit. There was a good chance that things might have gotten medieval; real ugly, real quick. But we managed to have a blast anyway, and piled happily into a cab for a drunken ride home at last call... Well, at least it felt like last call. I was absolutely shocked (a la Rob Goldenberg) when I looked at the cabbie's clock and it read 10:58pm. So we decided to stop in and see Sandra, who was still working at the 'cane, and she served us up a round of Jim-Jack-and-John shots that just about everyone could have done without, along with a few pints of Guiness and about a thousand glasses of water. We loaded up the jukebox with Pogues and Van tunes, but were out of the door before we ever got to hear them.

By the time we got back to my place, Dunner was sawwing logs on the couch, and I figured we'd be doing the same soon enough. But Lisa was kind enough to bring me back three beautiful bottles of Bourbon from Tennessee (Corner Creek Reserve, George Dickel Original Tennessee, and Rebel Yell Kentucky Straight). Obviously, it would have been rude to go to bed without a wee Dickel, so we cracked the bottle while listening to Steve Earle (by Dunner's request, which he slept through entirely). That first taste went down so well that we decided to have another. And then another. And then yet another. And by the time Sully and I knew what had hit us, we'd listened and sung along to such beautifully tear-jerking vinyl classics as Van's Into The Mystic, Neil's Helpless (acoustic) and After the Goldrush (studio cut), Cocker's With a Little Help From My Friends, The Beach Boys God Only Knows, the entire second record on Dylan's genius twin Blonde on Blonde, and Seger's Night Moves. Just another night in Eric Foreman's basement.

At some point, Sandra came home from work and tried to join in on the festivities, but apparently we were muttering such incoherent drunken jibberish that she decided she'd have a more satisfying level of social interaction by going upstairs to bed where she could pet the cat we're currently babysitting. Strange, because I thought we were making perfect sense. I went to bed sometime after 4:30, completely oblivious as to how I managed to endure such a sloppy, drunken marathon

All in all, a pretty beautiful St. Patrick's Day. It wasn't the same without Ronnie and my parents there. And it hasn't been the same since ol' Bob left us. But we did our best to make him proud, and you can bet your last pint that he was up there havin' one for us, just as we were havin' one too many for him.
Posted by Sean McCallum at 7:15 p.m.